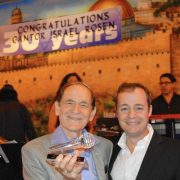 Temple Solel in Hollywood had a jubilant celebration recently in honor of Cantor Israel Rosen for his 30 years at the congregation featuring a Mediterranean brunch and shuk.

What was most unusual about the celebration is that Cantor Rosen is not retiring from his work. Most congregations usually only have a gala event for a rabbi or cantor upon retirement.

The celebration featured a shuk inside the temple making the 175 guests feel as if they were in a Jerusalem market, featuring displays of chocolates, jewelry and Judaic merchandise.

“Cantor Rosen is from Israel, so we wanted to make him feel at home by recreating an Israeli village in his honor,” said Stacey Fisher, chair of the 24 member committee for the event.

“For the last thirty years, Cantor Rosen has touched hearts for his enthusiasm and innovative programs, such as Israeli dancing for so long that we wanted to create a special day for him,” added Fisher.

“Cantor Rosen is very much beloved by everyone at Temple Solel and we want him to be with us forever,” said Temple Solel president Joseph Stadlen at the event.

The celebration included the Shalom Band singing many Israeli and popular songs. When the song “Hallelujah” was played, the cantor was lifted up in a chair, as if he was a groom, while many others in the congregation spontaneously broke into a jubilant flash mob dance.

Stadlen presented Rosen with a crystal microphone as part of the celebration.

Engaging unaffiliated Jews to be discussed
Scroll to top